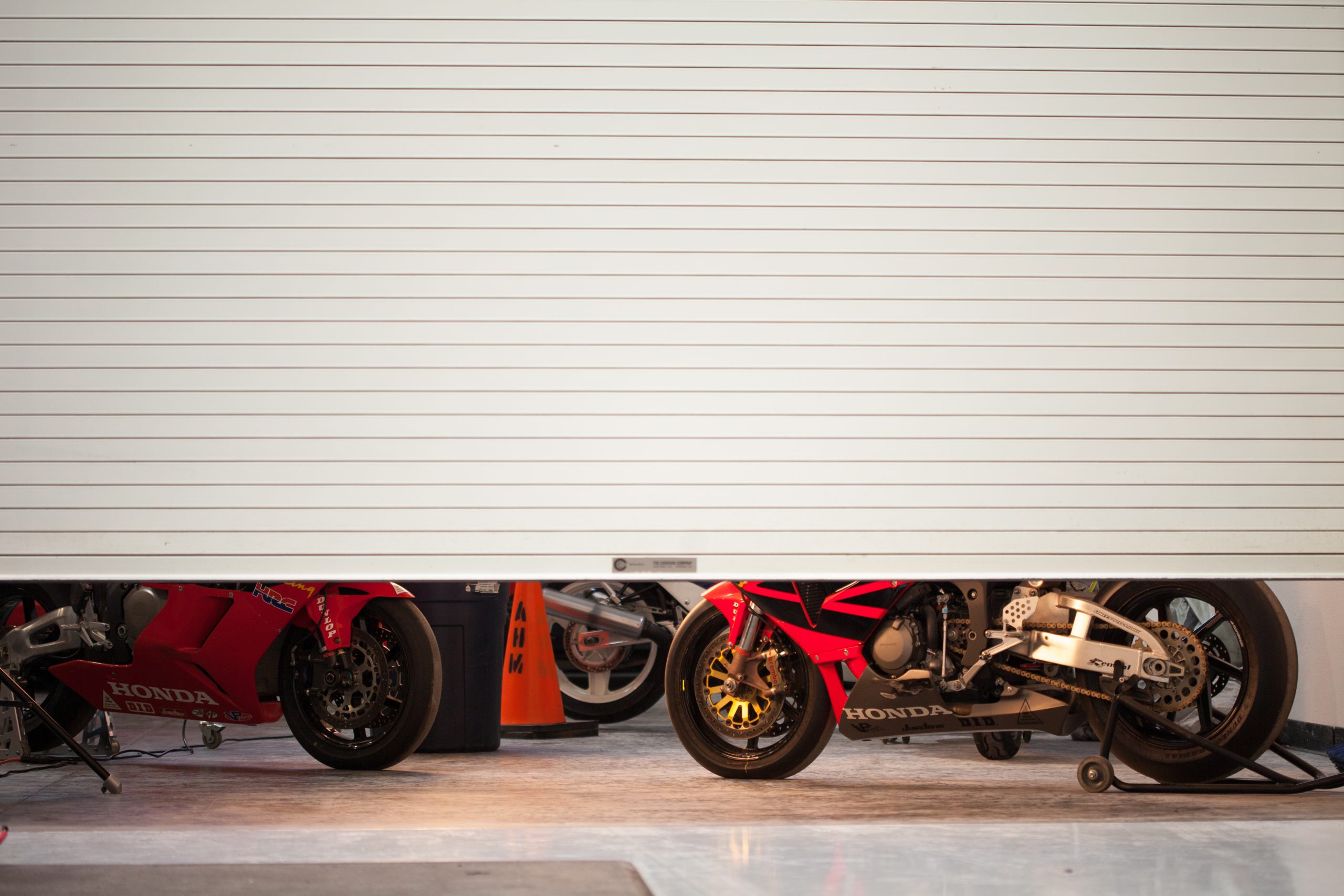 Once Great Hondas out to Pasture

Hidden away in the corner of an unassuming block of white stucco industrial buildings in Southern California, Honda maintains a warehouse that holds some of their storied race machines. Inside the facility—which is strictly off-limits to the public (we are sworn to secrecy as to its whereabouts)—occupying the dark corners of the cavernous structure, is a collection of Honda racing machines that have contributed significantly to the Japanese manufacturer’s legacy. For the uninitiated, it is merely a dusty warehouse where some old–and not so old–motorcycles bearing the famous trademarked wings have been stored. For the devout it is a treasure trove of racing history, marking the years via a long list of prominent race wins.

Honda has been in the racing game for well over half a century, their first road race being the famous Isle of Man TT in 1959. In the years since, Honda has cast its engineering prowess over a broad spectrum of racing disciplines to become a major force in virtually every category of two-wheel competition, producing myriad titles in a wide array of championships, launching the careers of many a racer.

During those fifty-plus years, Honda constantly stirred the caldron of technological advancement with a host of factory machines that changed the landscape of racing—as well as motorcycling. In their day, the machines pictured on these pages were all ridden in anger at motocross tracks and paved circuits all across America. These bikes were the ultimate factory workhorses and in their respective primes, when not on track, they were usually carefully guarded behind the chain-link fences of paddocks.

However, racing is a pragmatic and cruel business in terms of longevity. Each of these machines, regardless of their illustrious stature, was eventually replaced by faster, newer, more technically advanced motorcycles, leaving Honda with no choice but to, so to speak, put them out to pasture. Emblazoned with numbers that have become synonymous with victory; 2, 17, 69, 80, 98, 100, and a whole lot of number ones, they sit here now in quiet repose, a striking contrast to the irascible nature of their legend.

In 1968 Honda introduced a game-changing technical marvel when they unveiled the now legendary CB750. The powerful in-line four-cylinder machine begged to be put on a paved circuit, so Honda built four special “Race Type” 750s for the 1970 Daytona 200 and placed racing legend Dick Mann (who had finished runner-up three times over fifteen years of competing at Daytona) on one of them. 200 miles later Mann gave Honda their first AMA National win.

Mann’s Daytona-winning machine was shipped to Europe to help support Honda’s World Championship team and eventually went missing—victim of being parted out over the course of the season to keep other race bikes running. To commemorate the significant victory, Honda commissioned this replica. Since then the actual bike—duly authenticated with a certificate of provenance—turned up in the hands of a collector in the suburbs of Paris.

When Honda introduced their groundbreaking Elsinore CR250 in 1973—their first motocross-focused motorcycle—they were intent on making a very big splash. With designs on proving their new machine’s capabilities, they retained National Champion Gary Jones, wooing him away from Yamaha—with whom he had won the title in 1972. Jones (and Honda) took an enormous gamble on the untried, unknown Elsinore. The gambit paid off, Jones successfully defended his title aboard this very machine, clinching the highly-competitive AMA 250cc Motocross Championship in ’73. It was an audacious statement; winning the title in their first attempt with an all-new machine, effectively beginning Honda’s longstanding presence as a major factor in motocross. Jones’ factory bike had forward-mounted shocks and a Bassani pipe, but otherwise appeared not far from stock. The factory Elsinores famously featured a day-glow orange stripe down the middle of the tank that replaced the stock green color stripe.

Number Ones. Following the success of the Elsinore in the 250cc Championship in 1973, Honda won the first-ever AMA 125cc Motocross Championship with Marty Smith in 1974. The Californian won the title again in 1975 aboard the machine pictured here (far left). The 125cc class was extremely popular and Smith became its Ambassador with a picture-perfect riding style (team manager, Dave Arnold, was famously quoted as saying that a bad riding picture of Smith didn’t exist anywhere).

Smith moved to the open class (aka 500cc) and brought Honda the title in 1977 aboard the machine in the middle; the mighty CR500. Though by today’s standards it may look a bit primitive, this was in fact the zenith of factory racers in its day.

In the late 70s promoter, Gavin Trippe dreamed up the concept of pitting racers from different disciplines against one another on a course that combined elements of road racing, dirt track, and motocross to determine an all-around champion. It was called The Superbikers. The annual event, held at Carlsbad raceway and broadcast by ABC Wide World of Sports, became a real spectacle and inspired manufacturers to build one-off 500cc factory machines specifically to handle the unique demands of the course. American Steve Wise, a Honda factory motocross rider, rode this machine to two consecutive titles (1980 & 1981). Wise’s victories at the Superbikers led Honda to offer the motocross racer a full factory Superbike ride.

Of note: parked behind Wise’s bike is Jeremy McGrath’s 1996 SuperCross Championship bike, and behind that is one of Honda’s factory Baja 1000 efforts.

Over the years various manufacturers have experimented with front-ends with the intent of eliminating front-end dive under braking. Honda, at Roger DeCoster’s urging, developed perhaps one of the most intriguing—and certainly artistic—creations for a motocross application. This design by Valentino Ribi used hinged aluminum rocker arms with a single shock mounted at the triple clamps. The complex system was rumored to actually weigh less than a traditional telescopic fork. The front end was reported to have some favorable characteristics, however Honda pulled the plug citing the exorbitant cost.

Darrel Shultz’ championship-winning season in the open class in 1982 didn’t come easy. The personable and soft-spoken Northern California rider suffered severe knee problems throughout the season and then secretly rode the final race of the championship with a recently collapsed lung, suffered in a training crash the week prior. Bruised and battered, Shultz rode just conservatively enough to garner the necessary points to secure the number one plate. Rumor has it that Honda had two plainclothes paramedics, equipped with an inflator, pose as spectators, ready to utilize a special tube that had been inserted in Shultz’ chest in case the lung collapsed again during the two motos—so that Shultz could press on.

Shultz’ 1982 winning machine, authenticated by the champ’s name Sharpie’d on the shock reservoir by the Showa factory technicians.

The machine pictured here was part of the extremely powerful stable of factory motocross machines Honda built with the intent of dominating all three classes (125cc, 250cc, and 500cc) that year. It is an example of how radical the factory prototype Hondas were in relation to stock machinery, each bike rumored to cost in the neighborhood of $200,000 (in 1982 dollars). When the AMA implemented the “production rule” in 1986 it spelled the end of an era and of the beautifully exotic prototype race bikes.

The release of the VFR Interceptor in 1984 was the birth of modern Superbikes, providing a powerful, decent handling, lightweight platform to build from. Honda-mounted Fred Merkel dominated the burgeoning AMA Superbike Championship with three consecutive titles from 1984 to 1986. The good-looking and personable long-haired Californian became the series’ first genuine star and helped grow the sport. Fans began to refer to Merkel as “Flying Fred,” borrowing the nickname from the famous Flying Merkel motorcycle of yesteryear.

When Honda built this flat tracker they had one goal in mind; to break the stranglehold Harley-Davidson had on American dirt track. The air-cooled 750cc V-twin motor mirrored the exact bore and stroke of the Harley’s it set out to dethrone. Californian “Bubba” Shobert rode the factory RS750 to the 1985, 1986, and 1987 Grand National Championship Titles. This is the bike he rode to number one in 1986.

“Bubba” Shobert proved uncanny versatility aboard a motorcycle by moving from the dirt tracks of the AMA Grand National Championship into the AMA Superbike chase. Following his three straight titles aboard the RS750 flat tracker, Bubba climbed onto another Honda 750, the VFR F. After a strong performance in 1987 he clinched the Superbike crown in 1988.

When the AMA marshals ushered Bubba Shobert’s VFR through tech inspection in 1987 they most likely had no idea the champion flat tracker was on his way to membership in the highly exclusive “Grand Slam” club; one of only four riders (Doug Chandler, Dick Mann, Kenny Roberts, and Shobert) who have won national races in short track, half-mile, mile, TT and road racing. In addition, Shobert has the distinction of having piloted two different factory Honda race machines, from radically different disciplines, to number one plates. Shobert moved to the Grand Prix series but sadly never got to prove his mettle due to a highly misfortunate, career-ending accident on the cool-down lap of the 1989 USGP at Laguna Seca. Bubba was inducted into the AMA Motorcycle Hall of Fame in 1998.

The warehouse is so full of machines from Miguel Duhamel’s illustrious tenure at Honda they could create a private section just for him. Among a seemingly endless array of the famous number 17 Hondas is his 1991 Smokin’ Joes’ Championship-winning 600 F2.

Tucked away in a dusty corner of the warehouse is an Erion-sponsored Honda CBR 600 F4. The number one plate on it was awarded for the 1999 AMA Supersport Class, earned by a young Kentuckian who seven years later became the 2006 MotoGP World Champion. Nicky Hayden had a long and storied career with Honda, moving to WSBK. Unfortunately, Hayden died as a result of injuries suffered while training on a bicycle in Italy in 2017.

Sharing the floor with the replica of Dick Mann’s 1970 Daytona-winning CB750 is Miguel Duhamel’s 2001 Daytona Supersport-winning CBR–emblazoned with his famous number 17.

Duhamel won the Formula Extreme title in 2004 and 2005. This is the 2005 Championship-winning bike. Spread around the warehouse are a number of Duhamel’s factory Hondas. They all wear either his signature number 17 or one of the many number one plates he secured with Honda during his illustrious career.

This particular corner of the warehouse holds three of Honda’s very capable machines from three different seasons in AMA Superbike. On the far right is Jake Zemke’s factory Superbike machine circa 2007, sporting his famous number 98. On the left is British-born Neil Hodgson’s Corona-sponsored Honda, with his trademark number 100, which he raced in the 2009 AMA Superbike season. Unquestionably one of the coolest paint schemes to grace the grid that year, the lime green on yellow colors of the Corona bike were accented with slices of lime, a beer cap number plate background, and palm trees. The hip livery brought a degree of lighthearted fun to counter the seriousness of the Superbike paddock. After riding the limes to 2nd at Daytona, Hodgson was sidelined with a shoulder injury that eventually contributed to early retirement. Sandwiched in between is Neil Hodgson’s previous year’s (2008) factory Honda Superbike.

Yet another part of the warehouse is occupied by even more note-worthy Honda race metal. In the foreground is one of the ubiquitous Miguel Duhamel number 17 machines (this one a Superbike). On the right is Curtiss Roberts’ 2005 Pro Supersport CBR in the Erion Racing livery and adorned with his famous number 80. Partially obscured behind Duhamel’s and Roberts’ bikes is a machine that put yet another feather in Honda’s cap; the 1986 VFR 750 Interceptor 24-hour endurance record holder.

It may be difficult to fathom, but the machines we lust after under the Honda canopies at roadrace and motocross venues today, will eventually be retired and, most likely, some of them will be put out to pasture here in the non-descript warehouse somewhere in southern California. Perhaps in ten years we will be invited back to document all the historical achievements yet to unfold.